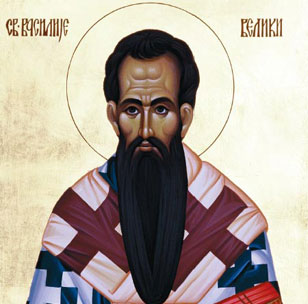 St. Vasilije (Basil of Caesarea) between 329 and 333 – January 1, 379 at Caesarea Mazaca in Cappadocia, also called Saint Basil the Great was Bishop of Caesarea, a leading churchman in the 4th century. The Eastern Orthodox Church and Eastern Catholic Churches consider him a saint and one of the Three Holy Hierarchs, together with Gregory Nazianzus and John Chrysostom. Basil, Gregory Nazianzus, and Basil’s brother Gregory of Nyssa are called the Cappadocian Fathers.

One of 10 children, he came from a wealthy and pious family that produced a number of saints, including his father, also named Basil, his mother Emelia, grandmother Macrina the Elder, sister Macrina the Younger and brothers Gregory of Nyssa and Peter, who became Bishop of Sebaste. His younger brother Naucratius was known for his dedication to Christ and his influence on Basil was rather dramatic. Some church historian presumed Theosebia was his youngest sister, who is also a saint among the Eastern Orthodox.