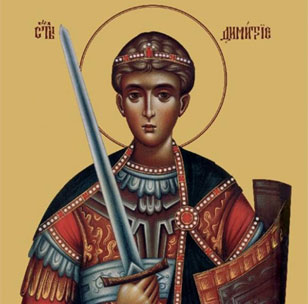 The Great Martyr Demetrius the Myrrh-gusher of Thessalonica was the son of a Roman proconsul in Thessalonica. Three centuries had elapsed and Roman paganism, spiritually shattered and defeated by the multitude of martyrs and confessors of the Savior, intensified its persecutions. The parents of St Demetrius were secretly Christians, and he was baptized and raised in the Christian Faith in a secret church in his father’s home, St. Demetrius is regarded as a protector of the young, and is also invoked by those struggling with lustful temptations.