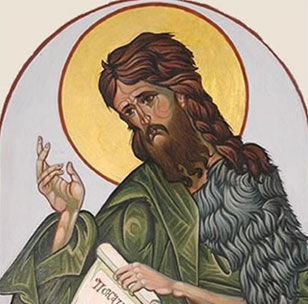 John the Baptist was the last of the Old Testament prophets, thus serving as a bridge between that period of revelation and the New Covenant. They also teach that, following his death, John descended into Hades and there once more preached that Jesus the Messiah was coming, so he was the Forerunner of Christ in death as he had been in life. According to Sacred Tradition, John the Baptist appears at the time of death to those who have not heard the Gospel of Christ, and preaches the Good News to them, that all may have the opportunity to be saved.

Orthodox churches will often have an icon of St. John the Baptist in a place of honor on the iconostasis, and he is frequently mentioned during the Divine Services. Every Tuesday throughout the year is dedicated to his memory.

The Eastern Orthodox Church remembers Saint John the Forerunner on six separate feast days, listed here in order in which they occur during the church year.