The Holy Trinity Church and School Community in Perth was registered on the 4th of September, 1953. The setting stone for the Church Hall was placed by the Russian archpriest Sergije on the 8th of January 1955. The centre was built through donations and was blessed on the 1st of July 1956 by the monk Georgije (Djonlic). There were 72 members at the time.

Following the division of the Church in 1963, the Holy Trinity Church remained under the jurisdiction of Bishop Dionisije who visited the church in person in November 1964.

The first priest was Dragoljub Petkovic who arrived on the 14th of January, 1965 and was ordained by the Bishop Dionisije himself. In the beginning, the Holy Service was conducted within the church hall, until a Church was later built and blessed on February 26th, 1967, by Bishop Dimitrije (Balac), who also blessed the iconostasis in 1973.

The new priest, Rastko Ninkovic, was ordained on the 22nd of March 1968 and held service at the Church up until the 30th of September 1979. Following the departure of Father Ninkovic, the church was left without a priest and service was temporarily conducted by the Ukranian Priest Valentin. Occasionally Bishop Petar would visit to instil courage and spiritually inspire faithful Serbs.

The Queen Mary female organisation which existed in this Church and School community was disbanded in 1971 and the Queen Mary Serbian Sisterhood was formed.

With the blessing of Bishop Petar, on the 7th of February 1982, a young Serbian priest from Romania, Milorad Soaktar was appointed the Churches’ priest, and remains at this parish to this day.

This parish was also visited by metropolitan Iriney (Kovacevic) in January 1987, archimandrite Sava (Juric) in 1989 and bishop Amfilohije (Radovic), all of whom offered spiritual rejuvenation and support to the parish.

The parish paper was founded in 1982, under the name of ‘Young Serbian Falcons’ and editorial guidance of Kosta Mijatovic.

During the presidential period of Kosta Mijatovic, in 1987 the church board purchased a house in the vicinity of the Church hall. Subsequently, the following board (headed by Djura Ristic) purchased another house close to the Church. Three separate two-storey houses were built on this location in the year 2000.

The Church Sunday school was started in 1985 and the teachers, among others, were: Dana Popovic, Vera Stojanovic, Dimitrije Stojanovic, Zana i Radmila Mijatovic. In the same year, choreographer Vera Zimonjic founded the folkloric dance troupe.

In 1998, a library has also been present within the church, run by Sasa Stankovic.

During the 1990’s, a large influx of Serbian’s fleeing the horrors of war and economic problems in their homeland, significantly increased the number of parishioners. It is estimated that there are currently approximately 13,000 Serbians living in Perth and it’s surrounds.

Apart from Serbian emigrants, in the past few years, there has also been a notable presence of Orthodox followers from the Russian, Romanian, Greek and other fraternal churches, at the Holy Trinity Church.

The church has recently ben reconstructed. together with refurbishment of the church hall with major works completed in 2016. 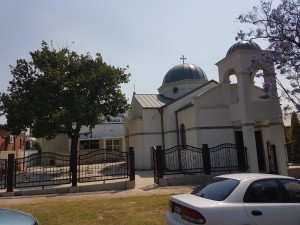