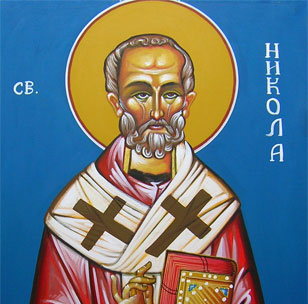 Saint Nicholas, the Wonderworker, Archbishop of Myra in Lycia is famed as a great saint pleasing unto God. He was born in the city of Patara in the region of Lycia (on the south coast of the Asia Minor peninsula), and was the only son of pious parents Theophanes and Nonna, who had vowed to dedicate him to God.

As the fruit of the prayer of his childless parents, the infant Nicholas from the very day of his birth revealed to people the light of his future glory as a wonderworker. His mother, Nonna, after giving birth was immediately healed from illness. The newborn infant, while still in the baptismal font, stood on his feet three hours, without support from anyone, thereby honoring the Most Holy Trinity. St Nicholas from his infancy began a life of fasting, and on Wednesdays and Fridays he would not accept milk from his mother until after his parents had finished their evening prayers.

From his childhood Nicholas thrived on the study of Divine Scripture; by day he would not leave church, and by night he prayed and read books, making himself a worthy dwelling place for the Holy Spirit. Bishop Nicholas of Patara rejoiced at the spiritual success and deep piety of his nephew. He ordained him a reader, and then elevated Nicholas to the priesthood, making him his assistant and entrusting him to instruct the flock.

St Nicholas is the patron of travelers, and we pray to him for deliverance from floods, poverty, or any misfortunes. He has promised to help those who remember his parents, Theophanes and Nonna.