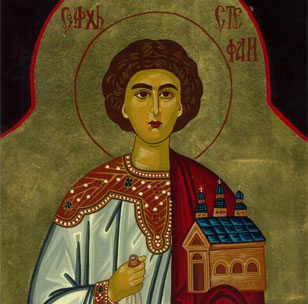 Stephen was a kinsman of the Apostle Paul and one of those Jews who lived in the Hellenic provinces. Stephen was the first of the seven deacons whom the holy apostles ordained and appointed to the service of assisting the poor in Jerusalem. For this, he is called the archdeacon. By the power of his faith, Stephen worked great miracles among the people. The wicked Jews disputed with him, but they were always defeated by his wisdom and the power of the Spirit, wo acted through him.