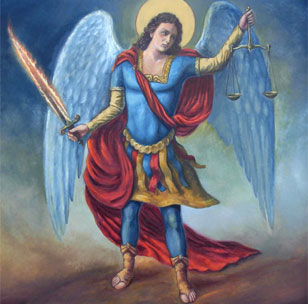 This great archangel of God is celebrated on March 26. On this day however, he is celebrated and honored for his appearances and miracles throughout the entire history of man’s salvation. It is believed that this celebration was first established on Mt. Athos in the ninth century, during the reign of Emperor Basil and the Empress Constantina Porphyrogenitus and Patriarch Nicholas Chrysoverges, on the occasion of the appearance of the Archangel Gabriel in a cell near Karyes where he wrote on a stone tablet with his finger, the hymn to the Birth-giver of God, ‘Worthy It is meet,’ (Dostojno Jest Axion Estin). As a result of this, even today, this cell is called the cell of ‘Axion Estin.’ I the appearance to the Holy Virgin in Nazareth and informing Her of the good news of the conception and the birth of the Lord Jesus Christ; the appearance to the righteous Joseph; the appearance to the shepherds near Bethlehem; the appearance to the Lord Himself in the Garden of Gethsemane when he strengthened our Lord as a man prior to His passion; the appearance to the myrrh-bearing women and so forth.