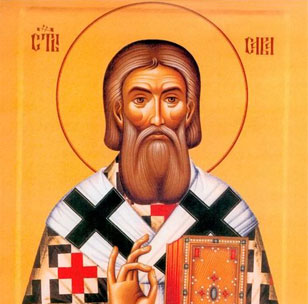 Saint Sava (1175 – January 14, 1235), originally the prince Rastko Nemanjic (son of the Serbian ruler and founder of the Serbian medieval state Stefan Nemanja and brother of Stefan Prvovencani, first Serbian king), is the first Serb archbishop (1219-1233), the most important saint in the Serbian Orthodox Church and important cultural and political worker of that time.
After his father’s death, Sava retreated to an ascetic monastery in Kareya which he built himself in 1199. He also wrote the Kareya Typicon both for Hilandar and for the monastery of ascetism. The last typicon is inscribed into the marble board at the ascetic monastery, which today also exists in it. He stayed on Athos until the end of 1207.

In 1208 Sava returned to Serbia, where the feuding between his brothers had created a state or anarchy. Sava set up his base at Studenica monastery, and started to organize the Serbian Orthodox Church in a reasonable manner. He also brought several monks with him to perform pastoral and missionary work among the people. He eventually managed to free the Serbian church from the jurisdication of the Greek Orthodox Archbishop of Ohrid. In 1219, Sava was consecrated the first archbishop of the new Serbian Church by Patriarch Manuel I of Constantinople, who was then in exile at Nicaea.

Saint Sava is considered the founder of the independent Serbian Orthodox Church and Serbian Orthodox Christians celebrate him as patron saint of education and medicine. He is commemorated on January 27 according to the Julian calendar and on January 14 according to the Gregorian calendar. Since the 1830’s, Saint Sava has become the patron saint of Serb schools and schoolchildren. On his day, students partake in recitals in church.