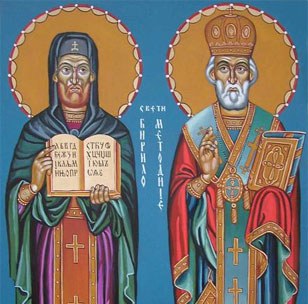 Constantine (later Cyril) and Michael (later Methodius) were born early in the 9th century in Thessalonika into a senatorial family. The years of their birth are uncertain. Constantine, the older, may have been born in 826, while Methodius is believed to have been born in 827. Their father, Leon, was Drungarios of the Byzantine Roman Thema of Thessalonika, which position included the Slavs of Macedonia. Their mother is believed to have been Slavic. Being raised in an area with both Greek and Slavic speakers endowed the brothers with a good knowledge of the two languages.

Our fathers among the saints Cyril and Methodius were brothers who brought Orthodoxy to the Slavic peoples of central Europe in the ninth century. In preparation for their mission to the Slavs they devised the Glagolitic alphabet to translate the Holy Scriptures and other Christian writings into what is now called Old Church Slavonic. Glagolitic later developed into the Cyrillic alphabet which is now used in a number of Slavic languages.