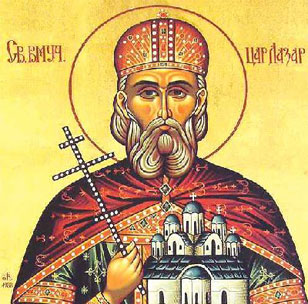 He was one of the greatest men of Serbia who ruled the kingdom after King Dusan. Upon the death of King UroS, Lazar was crowned King of Serbia by Patriarch Ephraim. He sent a delegation to Constantinople, including a monk called Isaiah, to plead for the removing of the anathema from the Serbian people. He went to war on several occasions against the Turkish Pasha, finally clashing with the Turkish king, Amurat, at Kosovo on June 15th, 1389, being slain there. His body was taken to Ravanica near Cupria, a foundation of his, and buried there, but was later taken to New Ravanica in Srem. During the Second World War, in 1942, it was taken to Belgrade and placed in the Cathedral, where it is preserved to this day and offers comfort and healing to all who turn to him in prayer. He restored Hilandar and Gornjak, built Ravanica and the Lazarica in Krugevac and was the founder of St Panteleimon, the Russian monastery on the Holy Mountain, as well as numerous other churches and monasteries.