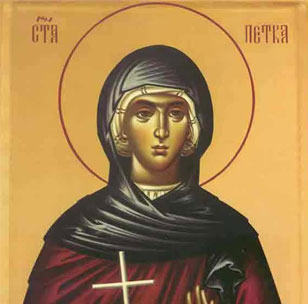 This glorious saint was of Serbian descent, and was born in the town of Epivat between Selymbria and Constantinople. St. Parasceva’s parents were wealthy, devout Christians. They also had a son, Euthymius, who was tonsured a monk during his parents’ lifetime, and later became the famous Bishop of Madytos. The virgin Parasceva always yearned for the ascetic life for the sake of Christ. After her parents’ repose, she left her home and went first to Constantinople, then to the wilderness of Jordan, where she lived the ascetic life until old age. Who can express all the labors, sufferings and demonic temptations that St. Parasceva endured in the course of her many years?

In her old age, an angel of God once appeared to her and said: ‘Leave the wilderness and return to your homeland; it is necessary that you render your body to the earth there, and your soul to the habitation of the Lord.’ St. Parasceva obeyed, and returned to Epivat. There she lived for two years in ceaseless fasting and prayer, then gave up her soul to God and took up her abode in Paradise. St. Parasceva entered into rest in the eleventh century. Over the course of time her relics were translated to Constantinople, to Trnovo, again to Constantinople, and then to Belgrade. Her relics now repose in Romania, in the town of Iasi. In Belgrade, the well of St. Petka miraculously heals the sick who draw near with faith in God and love for this saint.